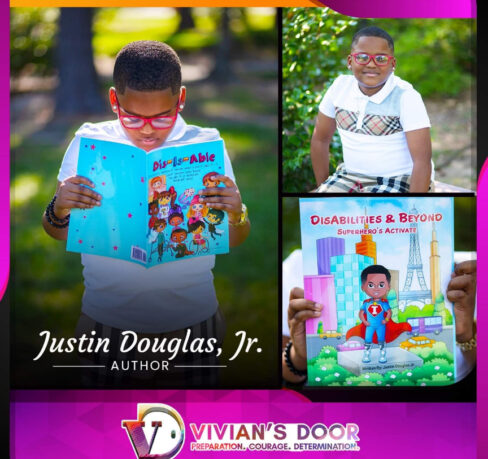 Dis Is Able: Rising Up Heroes

Justin Douglas is a brave little African American boy living with cerebral palsy and autism. The seven-year-old attends Kate Shepard Elementary School Mobile, AL. His condition has not stopped him from dreaming big and going after his dreams.

Justin was challenged by going to school having to learn with his disabilities. Every day he had to face other kids who made fun of his disabilities. These bullies many times took simple pleasure in tormenting him – but Justin did not allow all this to affect him negatively. Instead, he thinks about what he can do to help kids like him face similar problems.

One day, he went to his mom and said, “Mom, I want to write a book about heroes.” His mom wondered and asked, “What kind of heroes would you like to write about, Justin?” He replied, ‘a book about special needs heroes!’ So, with the help of his mom, his dream of writing a book about special needs heroes began to take shape. First, the mom and son duo started putting together Justin’s stories and experiences; they wrote down different scenes from things that happened at school.

While all this was going on, Justin’s mom got a call from an Internal Medicine doctor from Nigeria who wanted to write a book about special needs kids. He asked if he could write about Justin’s journey. Although having never physically met, through phone calls, emails, and text, they put down Justin’s stories and thoughts on paper, one page at a time. Justin would tell his mom, and she would share with the editor. Then the editor would share with the illustrator to match the words to the images.

To help further his dreams, Justin hosts fundraisers for his book because he wants to give back and help kids like him live with cerebral palsy and autism.

He recently had a fundraiser for the Bridge Program at USA Women’s and Children. He also plans to have another fundraiser for Ronald McDonald House in June and Chuck E Cheese in July. During each fundraiser, he sells the books and gives the proceeds to nonprofits or organizations (that support or help special needs kids).

Currently, Justin is working on a coloring book for kids his age and younger. He plans to feature 20 special needs kids and highlight them as heroes. He says, “No matter the disability or what is going on with the child, we want to show that it’s still possible…they are still able.” This inspiration is how the name of the coloring book came to life Dis is Able.

For his new coloring book, he wants kids with disabilities all across Mobile, AL, and America who have a story to tell but do not know how to tell it to send in a picture, description, and motto to get featured.

Justin’s motto is “No Matter What You Can Do It.”

He also hopes that these 20 special needs kids he is featuring in his new limited edition coloring book would help sell the book. The person who sells the most books receive half the proceeds either to keep for themselves or donate to a nonprofit of their choice.

Justin created the book not to profit but to celebrate and encourage kids like him to see themselves as heroes – differently able.

We celebrate Justin Douglas an incredible kid and wish him success in his present and future ventures. You can support Justin and find out about his latest books and fundraisers here.